With the explosion of technology and accessibility the importance of digital safety is clear for all… however what are the skills kids need to prepare them for the exciting world ahead and when should we start introducing them?


The key to engaging children in online safety is to trust them.

So what are three essential digital safety skills children need to develop to prepare them for life?

1. Assessing risk - It’s important kids can identify what risk factors are and how to respond to each, irrespective of the platform or device

2. Know what to disclose - There are plenty of examples when it’s okay to share certain information and keep others back

3. Develop digital self awareness - From digital footprints, to use of capitals and profile photos, an appreciation of your digital persona is essential for understanding how the world interprets you and your actions. As adults we have grown up with social networks and the internet, however we expect children to be fully competent in these areas, without giving them the opportunity to experience them in a safe way.
Posted by Mr E at 01:14 No comments:

Have a read of this article to learn about various different types of cyber scam - there's even a quiz!

If adults are as vulnerable to these scams as the article says, what about our children?
Posted by Mr E at 01:09 No comments:

Here's some food for thought about why it's important to manage e-safety...

The internet has overtaken television as the top media pastime for the UK’s children.

Ofcom’s report on Children and Parents: Media Use and Attitudes, published recently, reveals that children’s internet use has reached record highs, with youngsters aged 5-15 spending around 15 hours each week online – overtaking time spent watching a TV set for the first time.


Even pre-schoolers, aged 3-4, are spending eight hours and 18 minutes a week online, up an hour and a half from six hours 48 minutes in the last year.
According to Ofcom’s data, children aged 5-15 have increased their weekly online time by an hour and 18 minutes in the last year to 15 hours.
In contrast, children are spending less time watching a TV set, with their weekly viewing dropping from 14 hours 48 minutes in 2015 to 13 hours 36 minutes in the last year.
YouTube is one of the most popular online destinations for children to watch content, with around three quarters (73%) of those aged 5-15 using the video site. It is also a hit with pre-schoolers with 37% regularly watching YouTube videos, who typically pick ‘TV content’ such as cartoons and mini-movies.
And older children are beginning to show a preference for YouTube with four in ten 8-11s and 12-15s saying they prefer watching YouTube than the TV set.
Despite this, Ofcom’s research shows that TV still plays an important role in children’s lives with nine in 10 still watching, generally every day, and the largest number of children watching at peak family viewing time, 6 – 9pm.
Digital childhood
Digital devices are more widespread among children than ever, including the very young. Today’s research finds that a third (34%) of pre-schoolers (aged 3-4) own their own media device – such as a tablet or games console.
Pre-schoolers typically enjoy digital entertainment on a tablet, with more than half (55%) using one, and 16% owning their own tablet – up from just 3% in 2013.
As children reach pre-to-early teenage years, they prefer smartphones to tablets – with the proportion of children owning one up from 35% to 41% in the last year. This means one in three tweens (8-11s), and eight in 10 older children (12-15s) now have their own smartphone.
As children spend more of their time online, their awareness of advertising and ‘vlogger’ endorsements has also increased with more than half of internet users aged 12-15 (55%) now aware that online advertising can be personalised - up 10 percentage points in the last year. And, 12-15s awareness of product endorsement from vloggers has also increased by 10 percentage points to 57% in 2016.
But, many children still need help to identify advertising on search engine Google with only a minority of 8-11s (24%) and 12-15s (38%) correctly recognising sponsored links.
Posted by Mr E at 01:03 No comments:

E-Safety: it's a life skill.

Check out the other pages on this blog for SMART tips for children, some advice for parents and a few links to get you going on managing e-safety...

Email ThisBlogThis!Share to TwitterShare to FacebookShare to Pinterest
The best advice I've ever heard about e-safety: 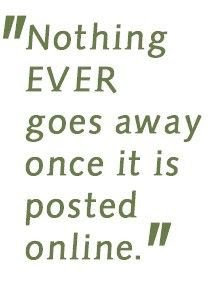